A USF Football Story – Why I miss Jim Leavitt

As a dedicated USF Football fan since 2004, I have witnessed and been a part of quite a few great things the program has achieved in such a short time. I have been there through good times and bad. When we upset big team after big team (WVU, Auburn, FSU, Notre Dame). When we booed two different quarterbacks to the bench. When we would rise and fall in the rankings. When we ascended to #2 in the nation and became the fastest in FBS history to do so. And now… 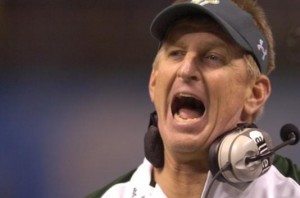 Now… What a time to be a Bulls fan, right? It has been a rough couple of years and this year doesn’t seem to be any better. Our coach, Skip Holtz, received a contract extension during a descent from the brink of consistent Top 25 contender. Our old coach, Jim Leavitt, is happily coaching one of the best linebacker corps in the nation with the San Francisco 49ers. Do I miss him? Yes. Do I want him back as our head coach? No, not really.

I do think he did great things for our program, but it definitely seemed like we needed a fresh face to get us to the next level and start winning Big East championships. Did I think Skip Holtz was the answer? Signs pointed to yes when he was hired. At this point, it may be an experiment gone bad. Yes there are still 5 games left and a chance to make a bowl game, but that just isn’t good enough for a team that was on the brink of championships. I still have faith that the team can recover and honestly have faith that Holtz could turn it around. The one thing that I can’t help but notice an miss is what Jim Leavitt brought to every game…

INTENSITY. Although it may have been what resulted in his firing, the man had crazy intensity. He could fire up anyone in a stadium with his passion in every situation. Headbutting a player wearing a helmet? That guy was nuts. And where is that intensity now? I watch Coach Holtz keep his cool in every situation, which may be good in some cases, but does nothing to fire up your players, coaches or fan base. The lack of intensity is starting to sound more like depression lately too. There is more talent on this team than most that Jim Leavitt had, but the team just can’t pull out a game late.

I think it all relates to the intensity they play with, or lack thereof. Coach Holtz needs to fire the guys up or encourage them to fire each other up on every play. You can see that without intensity there is a lack of big plays lately, including turnovers (0 INT). You turn up the intensity, so will the players and so will the fans… including me. Maybe you will even turn up a few wins.