We Lost a Great Man Out There!

For the past three years, each and every USF football fan has experienced a ton of different emotions. We’ve had triumph and heartbreak. We won some, and lost some, then lost some more. 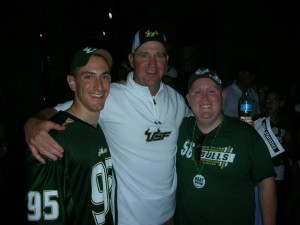 It started out great. The hopes and dreams of Bulls fans were high. While we lost the only coach we had ever had, we gained a big name and a lot hope! Skip Holtz was going to take us to the next level. We were going to win Big East championships. I remember sitting in Notre Dame Stadium, watching us achieve one of the greatest wins in program history. It was a great experience. The Skip Holtz era was on its way. Unfortunately, it didn’t work out the way many had expected or hoped.

Yes, we won a loooong battle that night, but it was the true joy of the players and coaches I met after the game that made it great. I met a great man that night and his record with USF shows that…

The academic record for USF football has set new records for GPA, APR and graduation. You could hear it in players talking about their future outside of football. They were excited about career prospects and many were graduating early. The culture at USF changed from one of special exceptions and suspensions, to a program stressing academics, character and personal success.

Whoever takes over this program will take over a program that is much better off in character and in the classroom. The same cannot be said on the field. Skip Holtz was extremely focused on developing his players into men, but that didn’t transfer onto the field. It’s unfortunate too, because he was extremely likable and I was proud to call him our coach. While I agree that it was time to move on as a program, he will be missed in the USF system.

So, we are losing a great man from the USF community. I hope that we can bring in another one that will also bring success on the football field. The one thing I can say to Skip Holtz, is thank you for raising the standards of USF football that you did. I wish you and your family the best of luck in the future.