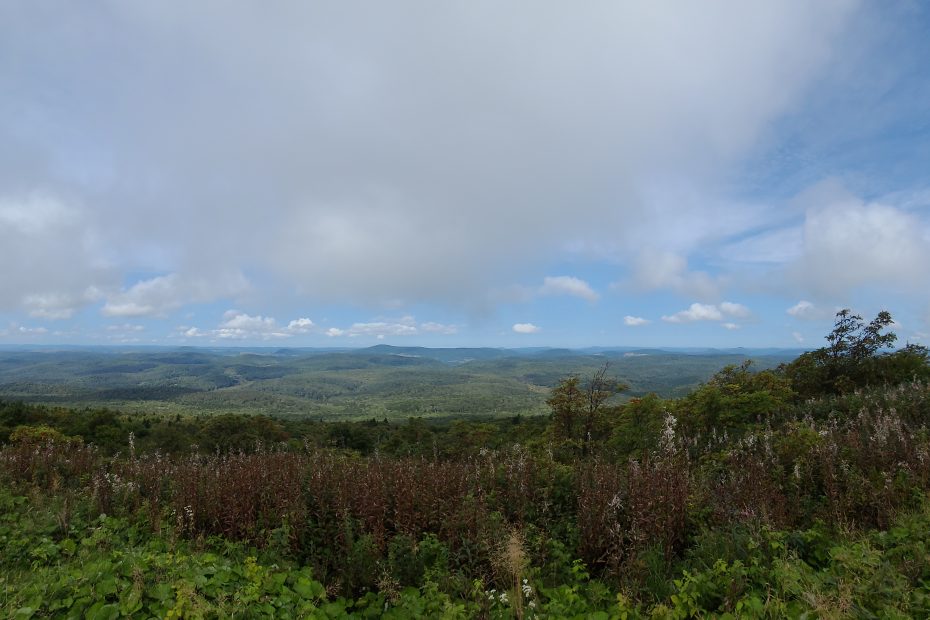 As my road trip is starting to wind down, it was time to take some time off work and wind down some country roads into West Virginia. My plan was camping in the mountains and I searched for something that would take me into the wild and off the grid. I found a campground that would accomplish both of those, but also give me easy access to the highest point in the mountain state. So off I went into the Monongahela National Forest.

I pretty quickly realized that I had chosen a very remote and off grid location. My “off the grid” location in NH was about 10 minutes from cell service and off some bigger roads. This campsite was about 30 minutes from the nearest market and over an hour to any sort of town or further for cell service. It was up a mix of winding gravel and dirt roads to my campsite. There were a few other campers at the site, but I barely saw anyone on the 30 minute drives to and from my camp. I was excited but also a little nervous about being so disconnected and distant from anything.

My first night was focused on getting settled into my campsite, have some dinner, and getting a fire going. I did some thinking and writing at the fire before calling it a night. I hadn’t really made plans for my next two days, but my energy from my trip was also running low, so I took long hikes or trails off the itinerary. The lack of service and GPS at times meant I couldn’t really look up things to do, so I just kinda winged it.

I woke up my first morning and has some breakfast before getting my car packed for a day away from camp. My first stop was Spruce Knob, the highest mountain in the mountain state at 4,861 ft. I was camping right next to it and there was an easy drive up to a nice trail around the top. When I got there all the views were covered in clouds/fog. I walked around and found a bench to sit at as the skies started to clear. I got to see some great views before heading out for a scenic drive around the area.

I drove over to the nearest market to get some firewood and fishing bait for later, then looked at my GPS for a driving path that looked fun. It took me north past the Seneca Rocks and I was tempted to take a horse up to the top but stayed on the road instead. I was looking for a good pit stop and pulled into the Smoke Hole Caverns. They happened to have a really cool tour starting in a few minutes so I went in and learned about the history of use by Native Americans, during the Civil War, and by moonshiners. I continued my drive along the country roads through Petersburg (name might have been the reason I chose this path), Franklin, and Judy Gap before making my way back to my campsite. I made a delicious dinner of salmon and veggies by the fire that night!

There was some rain that rolled through overnight and put a little damper on my last day in WV. I made the best of it though and found some opportunities in between the rain. I packed up my fishing supplies and a backpack to spend the day at the Spruce Knob Lake. I had the whole lake to myself at times and that was pretty awesome! I wasn’t having much luck fishing, but did manage to reel one in. I sat by the lake for a few hours, fishing, watching the birds, doing some writing/sketching, and just relaxing.

Some heavier rain started to roll in and I went to hide out in the car. I was going to head back to camp, but realized it was a better view at the lake in the rain than my campsite. The rain calmed down after about an hour and I walked around the empty lake trail with some great views of the lake and wilderness around me. After getting cleaned up at camp, I realized that the sun was coming out for sunset and went back down to the lake to enjoy it.

I managed to get a small fire going with wet logs and had a quick dinner this time. Then I used the rest of the daylight to pack up most of my things to prevent them getting more wet. I had a short breakfast in the morning and headed out on the road. I got to enjoy some great country roads on a few scenic byways, including parts of the Midland Trail, Highland Scenic Highway, Coal Heritage Trail, and Staunton-Parkersburg Turnpike. Then I stopped at the New River Gorge Bridge to see the awesome bridge from below.

I left the country roads of West Virginia down I-77 along some more great views from the road. While I love driving, I definitely wished I was the passenger and had more time to look around on a lot of these drives. It was time for my last stop though… in Charlotte, NC!